Letters from a Mouse and Other Great Direct Mail Examples

There is nothing as inspiring or educational as examples of how others have made creative use of direct mail or other media to achieve their goals. Here are some of our favourites.

B2B ad agency Heinz Marketing sends prospective clients an empty IPad box. Inside is a note that says “We know your time is super valuable, but if you’d be willing to come have a conversation with us to solve XYZ problem that you already have, we’ll hand you the iPad that was in this box.” The technique, though very expensive, is a sure-fire hit and generates meeting appointments and business for the agency that pay back the investment in a big way.

A fantastic example of how a packaged goods company used direct mail in its marketing mix. When Nestle was launching the Kit Kat Chunky bar in the U.K., they took this funny and engaging approach that was something that everyone could understand.

The concept of the campaign was to deliver a postcard to potential customers. They designed the postcard so that it would look like the royal mail card which is left when an item is too big to deliver through their mail box. The postcard instructed the recipient to go to their local news agent (store) to pick up a free KitKat Chunky.

So begins the first in a classic series of letters from the 1950s addressed to the customers and prospects of a local office equipment dealer. They were written and sent by the mouse (yes, a mouse) who inhabits the dealer’s premises. Created by Cleveland-based Robert Silverman, these letters stand the test of time as an inspiring demonstration of what can be achieved with a little out-of-the-box thinking and great writing skills.

You can read the full series of letters here.

This is another oldie but goodie celebrated by Richard S. Hodgson in his publication “The Greatest Direct Mail Sales Letters of All Time”.

Remember Games Magazine? It was one of the best publications (still is) for avid fans of puzzles of all types and had quite the following. As with so many magazines, Games depended upon direct mail for finding new subscribers.

With a deft bit of programming, especially impressive for its time, this mailing took personalization to a new level of cleverness and involvement, in a way that was brilliantly relevant to the product.

A large window at the top of the outer envelope displayed a series of dots with consecutive numbers. The teaser message said, “Connect the dots and discover a surprise from Games magazine! Gift pencil enclosed.”

Any real prospect for Games could hardly resist the connect-the-dots challenge. And when the envelope was opened, the dots were there at the top of the letter, which started:

And that’s what GAMES magazine is all about — to fascinate you, tease you; involve you in something entirely different . . . to help keep your wits sharp and your mind buzzing with fresh ideas . . . to entertain and delight you for hours on end.

So what happened when you connected the dots? Astonishingly, they spelled out your name! 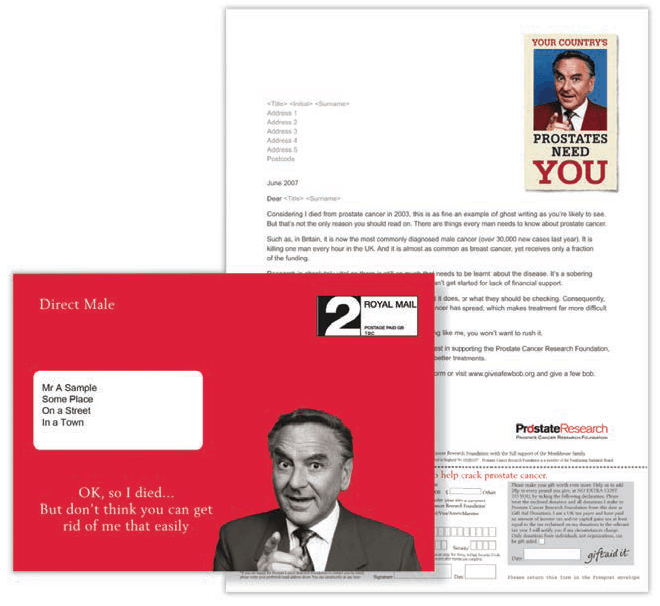 Here is a great example of how a Not-for-profit organization took an unconventional approach to its fundraising campaign based on solid research and insight.

Men in the UK don’t talk about health issues. Nor do they appreciate how common prostate cancer is and that it kills one man every hour. The challenge, therefore, was to create a campaign to nationally publicize both the disease and the Prostate Cancer Research Foundation, which funds independent research into its causes and treatments.

The aim was to reach men aged 45 and over, those most likely to be affected by the disease. Research revealed that the more emotional the charity appeal was, the more unemotional men became.

While a celebrity could add real weight to the campaign, a current sufferer of the disease might not feel comfortable speaking about his illness. The creative leap was to bring back a dead celebrity, Bob Monkhouse, to front a campaign for the disease that killed him.

While cancer and comedy do not usually sit well together, the success of the campaign rested on faithfully recreating the spirit of Bob Monkhouse. His wisecracking approach was both authentic and heartfelt. Even the message on the outside of the envelope captured the essence of Bob in 15 words: “OK, so I died… But don’t think you can get rid of me that easily.”

The campaign used mail with a strong call to action, and was coordinated with cinema and out of home.

The 5,000-item mail campaign achieved a 228% increase in the donor base with a 580% rise in the number of regular monthly donors and a 2,000% increase in traffic to the website.